Castle of the Knights

most impressive monument of the medieval period. It was built by the Knights of St John in the

provides an excellent example of architecture of this time. Inside the castle you will find many

to some of the Grand Masters. 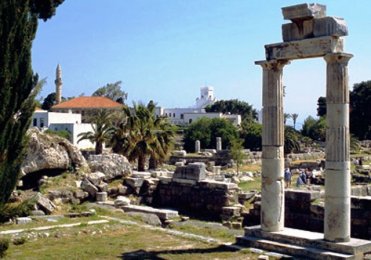 The largest single excavated section of ancient Kos is the Agora ( Ancient Town ). Facing the

side of the Museum in Eleftherias Square is the entrance to the Ancient Town, where you can

see Hellenistic remains mixed with Medieval. There are ruins of a Hellenistic temple dedicated

to Hercules, restored pillars of a small temple and the remains of a small sanctuary dedicated

to Aphrodite. The entrance to the Ancient Town is through a magnificent archway named "The

Tax Inspector's Gate". This is covered in colourful bougainvillaea in the summer months.

The Tree of Hippocrates 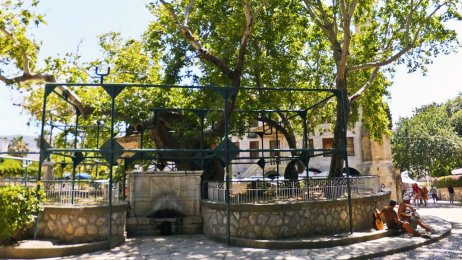 of medicine. Hippocrates who is considered to be the father of medicine. The tree is an oriental

plane (Platanus orientalis), the diameter of the trunk is 4.7 meters wide at its base, with its

perimeter stretches to 12 metres, making it the larget plane tree in Europe. Situated in the Platia

Platanou ("Square of the Platane"), in front of the Castle of the Knights. The current tree is

estimated to be 500 years old, but could possibly be a descendant of the original tree planted

by Hippocrates 2400 years ago. The tree has hollowed over the years and there are branches that

are supported by metal scaffolding. Two springs from the Ottoman times lie near the tree bearing

an Arabic inscription that informs the passerby of the “the water of Hippocrates.” 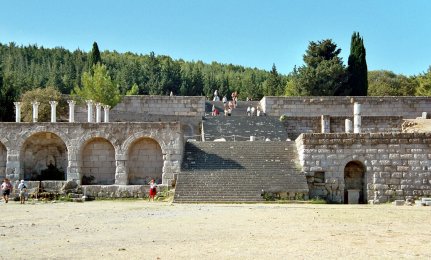 The Asklepeion is situated some 4km North West of Kos Town, on a pine clad hill from which the

view is breathtaking. It was a temple of worship, health and art, dating back from the 4th Century

BC. It consists of three terraces connected by a magnificent marble staircase. The first level

and Apollo. It was probably the most famous and best Hospital of that era with its running mineral

waters which were used in the treatments of skin disorders and spa therapy. The Asklepeion takes

its name from the Greek God of Medicine, Asklepius, and was built just after the death of

Hippocrates, whose methods were widely taught there. 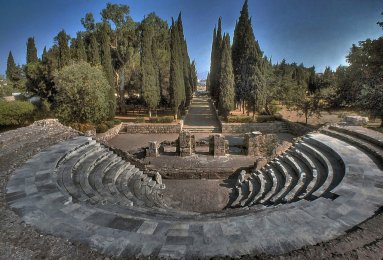 The Odeum is located to the south of Kos town. This ancient Theatre was built in the 3rd Century

AD and was excavated in 1929 during the Italian occupation. Here you will find 18 marble steps of

seats which are in excellent condition. The construction of this amphitheatre was based on vaulted

arcades and inside these arcades were found some valuable and ancient statues, including the

one of Hippocrates which is now housed in the museum in Kos town. 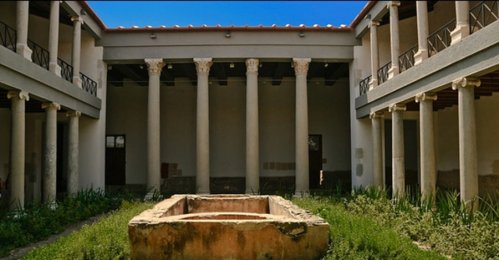 A little below the Odeum is a restored Roman Villa. Built on Hellenistic foundations, it is a

Pompeii-type house with interior open spaces, which provided light and air for the surrounding

rooms. Devastated by the 544 AD earthquake, this house was evidently the villa of a wealthy citizen

and is arrayed around three atria with mosaic floors. The smallest one, by the ticket booth, features

panthers attacking a stag. The largest courtyard shows another panther and a tiger on opposite sides,

while the pool of the third atrium is surrounded by dolphins, and a damaged nymph riding a

horse-headed sea monster, possibly a representation of Poseidon. There is a drinking room with a 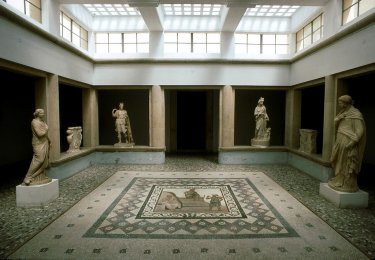 The museum of Kos is situated in the center of the island's capital. The museum contains

amazing statues, reliefs, grave stelae and mosaics mainly from the Hellenistic and Roman

periods. A statue attributed to Hippocrates is also on display.

Book your place in the sun and relax!

Fill out the details below if you would like to be informed about news from our accommodation.